A family moving to Southampton from Switzerland were stunned to find suspected illegal immigrants hiding in the back of their removal van.

At least five police vehicles descended on The Compass on Chapel Road, after three people were discovered .

Sarah and David Dooley are in the process of moving into a flat on the road and had just completed an 18-hour drive from Switzerland, accompanied by the van.

Three people were found in the vehicle when the removal men began unloading the couple’s furniture. 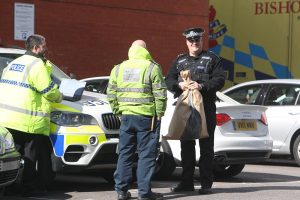 Mr Dooley, 54, grew up in Southampton before moving to Switzerland for work.They are now moving back to Southampton after his contract came to an end, with both seeking work in the city. He said: “From a humane perspective I think it’s so sad that people have to resort to this.

“For people to put themselves through this you have to feel for them.”

Removal man John Butler, 32, said he was “shocked” to discover the trio had climbed into the back of his company’s van and that it was a “first” for him.

He and his colleague Jamie Lewis, 25, called the police, and officers arrived within 15 minutes. 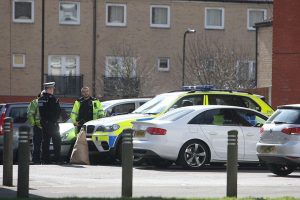 A spokesman for the force confirmed: “We were called at 11.21am after three Vietnamese people were found in a lorry in The Compass, Southampton.

“Two females and one male have been detained.”

It is unclear at what stage of the journey they may have entered the van.

While some of the Dooleys’ possessions were damaged by the suspected immigrants, Sarah said: “I want to say what a brilliant job the removal company has done.

“The staff have been brilliant.”